Chuck Wigzell and his handpicked crew are experienced and our professionals in kona deep sea fishing. We pride ourselves on being able to work well with individuals, families and groups – and have a great time while doing so. It is our mission to create the best deep sea fishing experience in Hawaii. Our many years of experience, combined with a passion for what we do, ensure that you enjoy spending the day with us on the water, and that you’ll walk away with an adventure you’ll never forget. Once you depart the island of Kona on one of our boats, we’ll fish for blue marlin, stripe marlin, spearfish, mahi mahi, ono and tuna, among others. Join us year-round, and rest assured knowing that we offer full refunds if any cancellations occur due to weather or ocean conditions. 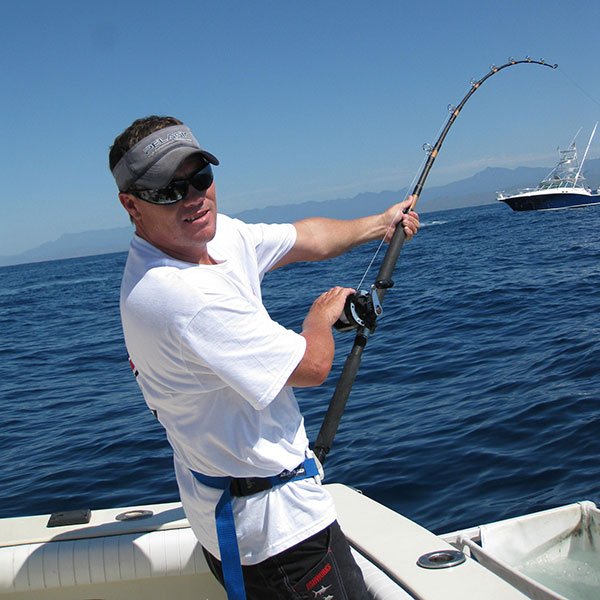 Captain Chuck Wigzell, owner and operator of Hooked Up, has been a captain in Kona, Hawaii since 1995. His experience on the water in Kona began when he was just a kid. He first moved to Hawaii in 1985, when his parents took then-thirteen-year-old Chuck from his home state of Oregon to the Big Island. Together, Chuck’s parents opened a restaurant that is now a local favorite: Pancho & Lefty’s in downtown Kona.

Chuck grew up in Hawaii, but chose to go to college at Southern Oregon University, where he earned his Bachelor of Science degree in Business Administration. While receiving his education, Chuck also honed his skills as a fisherman; by scheduling classes every other day of the week, he was able to fish on the Rogue and other Southern Oregon rivers for salmon and steelhead on Tuesdays and Thursdays. As Chuck jokingly puts it, “I think I spent more time on the river than I did in class.”

While his passion for fishing runs deep, Chuck credits the true start of his fishing career to his time he spent Kona deep sea fishing in 1992. During the summer months of his college years, he and his brother would fish for the family restaurant’s local catch using their dad’s boat. Today, Chuck and his wife, Beverley, live on The Island with their two kids, Zac and Hana. Chuck’s parents’ restaurant, Pancho & Lefty’s, remains a downtown Kona establishment – and it still gets its fresh fish from Chuck himself. You can catch your own fish with Chuck and have it cooked for your very own fresh-caught fish dinner at Pancho & Lefty’s. Doing so offers you a 20% discount and a meal you won’t forget.

Rocky, a third generation fisherman, comes to Kona from November through April to escape the chilly winter months in New Hampshire. He fishes for Captain Chuck full time during these winter months on the Hooked Up and Au Kalani.  This is Rocky’s 12 year captaining and crewing for us.  Rocky and his family own Gauron fishing Parties out of Hampton Beach, where they fish for cod, pollack and hadick, in addition to fishing commercial giant blue fin tuna. At the age of just 19, Rocky took over his dad’s command and took full responsibility for his family’s 90-foot boat. Today, Rocky splits his time between fishing off the coast of New Hampshire and fishing with Chuck off the island of Hawaii in the winters, which he has done since 2008. [/twocol_one] 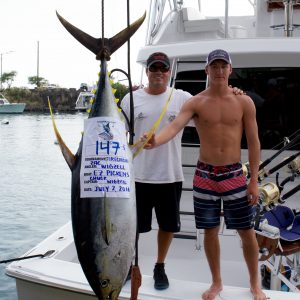 Captain Zac Wigzell is the son of Chuck and has been fishing in Kona Hawaii since he was born.  Zac held a world record for the largest spearfish ever caught for a male in the 10 and under division.  He has been involved in many marlin tournament placings and wins while fishing for his father.  Zac has also got the opportunity to crew and to learn from some of the best guys that come threw Kona to fish for the marlin season’s over the years.  Zac currently attends Southern Oregon University and is on the wrestling team.  He comes home to crew for the summer season on the Hooked Up and Ez Pickens with his father when he is not training.  Zac got his 100 ton captains license as soon as he turned 19 years old. First summer back from college Zac was captaining his own manta ray boat and his sister Hana Wigzell was the snorkel guide. So Zac got some good captain/boat experience besides working for his father.

We had avery nice time. Your crew was excellent. We will be back again. Thank you so much. 🙂

Thanks Chuck and Kerry for a fun afternoon. So glad we caught our dinner. Your brother treated us royally. Great dinner.

Thanks again to you and Carl for sending us home with a mahi.
Many thanks!

Thanks again for a great day on the water on Monday PM. Susanne, Alexandra, Jennet, Nick and I rally appreciated your tailored trip just for us. Too bad we didn’t “Hook Up” on anything on either the outbound or return trip from Buoy F. We finally ran out of tuna yesterday after four days of great Poki appetizers and Ahi for dinner.

I’ve been around game fishing long enough to know it’s not just luck. It all reflects on the skippers preparation and attention to detail, from the sharpness of your hooks, maintenance of your boat and fishing gear, decisions on where to go, what speed, what to troll, choice and placement of your lures, to crew work, concentration etc. – and you are very focused!

Just wanted to let you know that we had a great time with Rick and Shawn on our full day charter (sorry you couldn’t be with us)!!!!
See you next May!!!!
Mahalo!!!!

Thanks again for a good day on the 27th. It was great landing the big yellowfin tuna and thanks to Bevan for his help. It was a pity we didn’t hook a marlin. My brother saw in the next day’s West Hawaii paper that you had hooked 4 the previous week -such is fishing.
Thanks again and if/when we return to the Big Island we will be out with you again.

Just wanted to send you a big thank you for the great day on the water. We all saw action and that’s we we asked for. Sometimes you tie into a big one, some times you don’t. It was a good day to be on the water.

Just wanted to say thank you for a very memorable day. Great boat, great crew and a 452 pound Blue Marlin was icing on the cake. Happy fishing.

Thanks so much for setting us up for Fishing on your boat on Friday. What a day! Many thanks for a great day, and to you and your crew for all of your aloha spirit.